“Ohio George” Montgomery, Driver of the Malco Gasser, to be Inducted into The Motorsports Hall of Fame 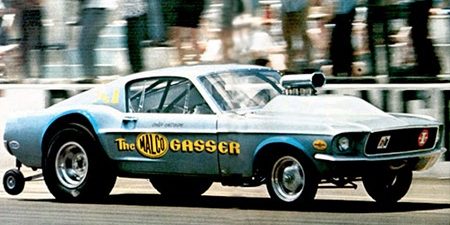 “Ohio George” Montgomery was one of drag racing’s most talented engineers and racers. His blown gassers were a central fixture in the “Gasser Wars” of the 1960s.

No supercharged Gasser racer shined brighter on the big stage. “Ohio George” racked up a total of four US National titles among several other NHRA National event victories in a variety of supercharged coupes and sedans throughout the 1950s, 1960s and 1970s. The 1933 Willys made Montgomery famous as he beat the other top gassers in the early ’60s. “We did a lot of match racing back then, and all the top gassers were from the west coast, Like Stone, Woods and Cook. I beat them a lot and the promoters named me ‘Ohio George’ and it just stuck,” he said. An alliance with FordTM Motor Company, brought further success with his legendary ‘33 Willys and a switch from a small block Chevy to Ford’ s new 427-cid SOHC hemi. Later his “Malco Gasser” Mustang brought him notoriety into the 70’s.

Montgomery’s race cars are all in secure locations: the 1933 Willys is in the Henry Ford Museum in Dearborn, Michigan; the first car, the 1934 Ford hot rod, is in the Don Garlits Drag Racing Museum in Florida; the 1967 Mustang is in the Petersen Museum in Los Angeles; and the 1969 Mustang is in a private collection.

George retired from driving in the mid-1980s, and was inducted into NHRA North Central Division’ s Hall of Fame in 1983, Don Garlits’ International Drag Racing Hall of Fame in 1992 and ranks 28th on the list of NHRA ’s 50 top drivers of all time. George has recently been inducted into The Motorsports Hall of Fame in the class of 2020, in Daytona, Florida. He currently resides in Dayton, Ohio where he and his son Gregg own and operate George’s Speed Shop – America’s oldest performance speed shop. You can find out more at www.ohiogeorge.com.

Malco Automotive Products partnered with “Ohio George” throughout his career and still enjoys a relationship with him to this day. Since 1953, Malco Products has been providing powerful cleaning and detailing products and accessories to keep cars spotless and clean, inside and out.

Scuff Stuff® Makes Surface Prep Smooth
February 6, 2018
Product Search
Product categories
Products
Go to Top
We use cookies to ensure that we give you the best experience on our website. If you continue to use this site we will assume that you are happy with it.OkNoPrivacy policy